In Guatemala a technique is used which was invented by Susanne Heisse. Plastic bottles are filled with plastic garbage found on the streets: plastic bags, wrappings, pieces of styrofoam, and so on. The bottles remain light and obtain a slightly higher isolation value. For the construction of the building it is necessary to construct a simple frame, either of wood or concrete. The bottles are fixed within the frame between two layers of chicken wire fencing. The wall is then covered and stiffened with cement mortar.
Because of the climate conditions there is no need for very high isolation values. The bottles are only used as filling to reduce the amount of cement that is necessary to make the walls. There also plays the role empowerment: the school children and people of the neighborhood are involved in the construction of their own school which is possible because the technology is very straightforward and does not involve trained labour. Finally, the participants learn from this how to build structures from on-site resources and garbage.

The My Shelter foundation (led by Illac Angelo Diaz) acquired site from the local government in San Pablo and sponsorship by Pepsi to build their first PET bottle school in Asia on the Philippines. For the school construction, 9000 PET bottles were collected during a public run in San Pablo and filled with mud, sand, straws, and even manure, all of this mixed with water. The space between the bottles is also filled with adobe which later simply dries in the sun. The structure is strenghtened by steel bars.

There exist several examples of such schools, most often realized by non-governmental organisations, such as My Shelter and Hug it Forward. Building the object is usually just visible result of primar intentions: community support together with cleaner landscape. The latter has already built a number of schools in Guatemala. The precursor of Hug it Forward is the independent organization Pura-vida founded by Susana Heisse in 2005.

This ECO activist and former East German prisoner founded the Pura Vida organization in order to help people in solving the garbage problem in the village of San Marcos. Two years later it moved to Lake Atitlan to form an Ecological movement: Susana Heisse invented the technology of ECO-brick: a PET bottle stuffed with oter plastic garbage. The ECO-brick is light, insulating and sustainable building unit using only local resources. When cleaned and closed its hygienic and shows safer behaviour during earthquakes.

After a hurricane Stan in 2005 Susana Heisse realized garbage could be turned into cheap building material. In 2008 Pura Vida developed their first Alternative Recycle Manual (www.puravidaatitlan.org), where communities around the world can learn how to transform garbage into construction.

Dale Wayne works with groups and individuals across the country, transforming recycled plastic bottles to create her installation Dancing on Joy’s Horizon: Bridging Communities. Participants cut and paint recycled plastic bottles, transforming them into glasslike sparkling blossoms and ribbons. Ms. Wayne then attaches their contributions to panels to be installed onto the fence that wraps the Kent County Courthouse during ArtPrize 2014. 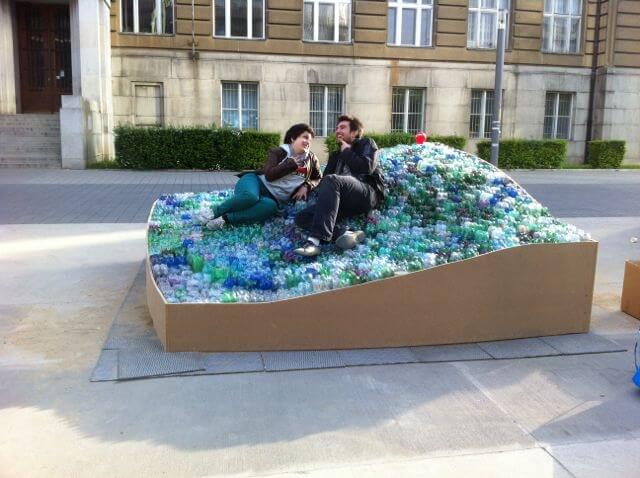 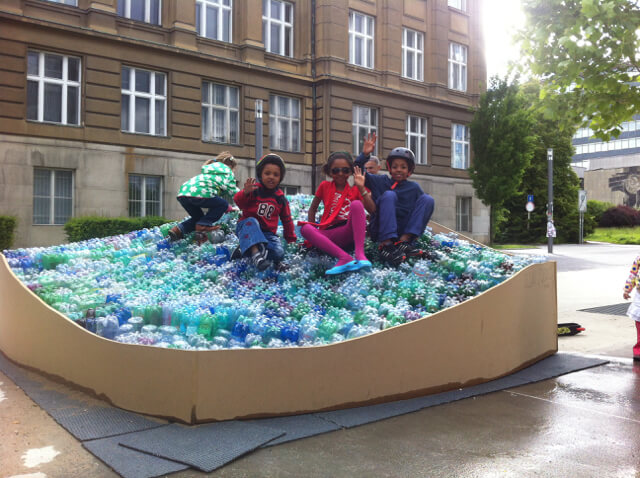 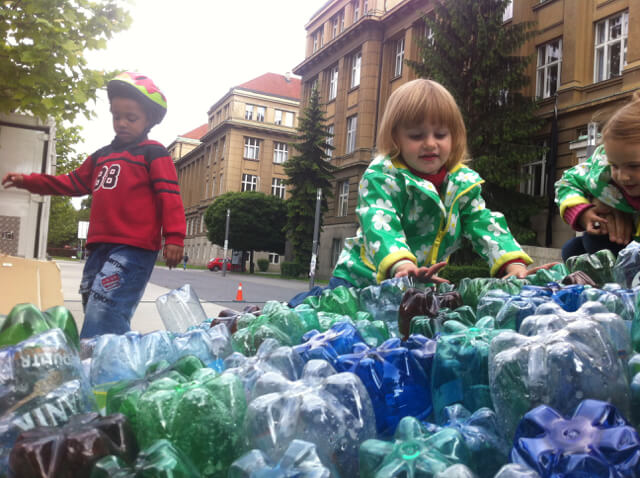 The project of PETree was started by PET-MAT (Nováková – Prokop) and Experimental studio Achten-Nováková at Fa CTU Prague with support of KMV a.s. It is a pilot project of an experimental construction made by selfbearing PET-bottle structure in form of a 5 meters tall christmas tree. The structure is hollow and works as an exhibition room in order to mediate information on the facts about reusable waste, focused on plastic garbage, represented by PET bottles. The tree has the aim to show the value of plastic PET garbage and its unbelievable quantity, which depends on consumers: all of us. The tree consists of 12 thousand 1,5l PET bottles, connected by wireframe and ropes. One Primary school and twelve highschools from Prague, Mladá Boleslav, Kolín, Slaný and Sedlčany took part on collection and they were also building a construction panel with decoration. The tree is enlightened at night with interesting lightshow delivered by IIM CVUT Prague. The PETree exhibition is open daily from 9 AM to 10 PM.